What is the Claddagh Story?

A short history of the Claddagh ring. Long ago a young man was captured and sold into slavery from the fishing village of Claddagh. Many years passed and he wondered if his true love would wait for him. Over the years he stole tiny bits of gold from his master to make her a ring. He fashioned a heart for love, a crown for loyalty and hands as a symbol of friendship. After many years he finally returned home to Claddagh. Upon his return and to his joy he discovered his true love had waited for him. He gave her the ring as a symbol of their love, loyalty and friendship forever known now as the Claddagh. Do you have someone in your life to which you pledge your love, loyalty and friendship forever?

Click Here to Learn How to Wear a Claddagh Ring

What way do you wear a Claddagh Ring?

Available at the Lynbrook Irish Shop and The Irish Jewelry Company .

What is a Leprechaun?

What is the Irish Harp ?

The Irish harp is a political symbol of Ireland. for centuries. The exact origin of the Irish Harp is really known.

The Claddagh Story is Irish folklore steeped in tradition and romance.

Irish Claddagh Blessing
As you might have heard there is an old Irish saying about the claddagh ring. “With These hands, I give you my heart and crown it with my love.” 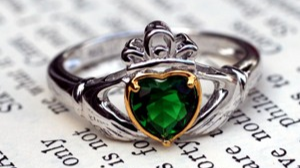 How Do You Wear A Claddagh Ring?

What is the Story of The Claddagh?

As you know The Claddagh Ring story is a wonderful Irish folklore. Imagine Ireland in the days long ago when a young man was captured and sold into slavery from the fishing village of Claddagh. Can you imagine how many years passed while

he wondered if his true love waited. As the years wore on he stole tiny bits of gold from his master to make her a ring. He fashioned a heart for love, a crown for loyalty and hands as a symbol of friendship. Can you just picture the tiny first claddagh ring being made? After many years he returned home to the village of Claddagh Ireland. To his magi

cal delight he discovered his true love had waited for him. He gave her the ring as a symbol of love, loyalty and friendship forever known now as the Claddagh Ring.

How do you pronounce Claddagh?

What is the meaning of the Claddagh?

Who can give a claddagh ring?

In Ireland it is traditional for mothers to hand down claddagh rings to their daughters. Although Claddagh Rings are traditional given by a loved one as a symbol of love, loyalty and friendship. The truth is anyone can buy a claddagh. 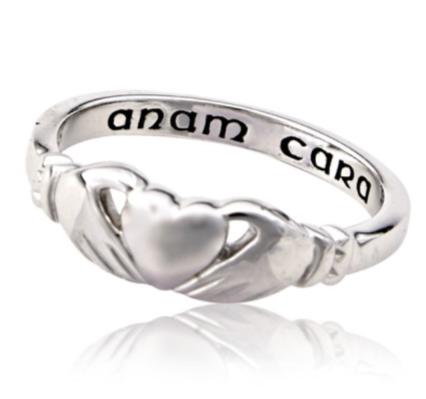 hat is a Fenian Claddagh?

Our Blackthorn Walking Stick is a handsome cane worthy of being a family heirloom. Blackthorn bushes are found throughout Ireland though with modern agricultural methods they are becoming less prevalent making a Blackthorn Stick even more unique. Blackthorn is renowned for its hardness being one of the tougher woods in the wild. It

has been prized for centuries as a material primarily for premium walking sticks. The original Blackthorn sticks were 1 to 2 foot long Irish shillelaghs (the national weapon of rural Ireland). A good Donnybrook would not have been complete without a handy Blackthorn Stick on your side. In expert hands the shillelagh was so fearsome it is said that the English outlawed it. To get around the law, the Irish took cuttings from the Blackthorn Bush that turned the original shillelagh into a 3-foot walking stick. As a result the Irish kept their modified shillelaghs and the world gained a beautiful and functional walking stick known simply as the Irish Blackthorn. These sticks have a smooth black painted finish and a handle at about a 30 degree angle.

The legend of the Celtic cat.  In Celtic folklore there is a magical set of cats or “fairy cats”. In Scotland they are known as the cait sith. In Ireland they are called cait sidhe. Whether Gaelic or Scotch Gaelic they are both pronounced as “caught shee”. The cait sidhe aren’t your ordinary felines, they are thought as fairies, even witches, and as spirit creatures that merely take the form of a cat. Those that have seen them describe them as being unusually large, all black cats with a spot of white fur on their chest. Generally, the cait sidhe is viewed as fearsome and was used as a symbol by Celtic warriors.

Celtic Cat Pendant with black enamel pays tribute to the cait sidhe. The cait sidhe is a mythical fairy creature in Scottish and Irish folklore.

May God be with you and bless you. May you see your children’s children. May you be poor in misfortunes and rich in blessings. May you know nothing but happiness from this day forward.

This Erin Go Bragh necklace is a true Irish charmer.

“May you have: A world of wishes at your command. God and his angels close to hand. Friends and family their love to impart, and Irish blessings deep in your heart!”